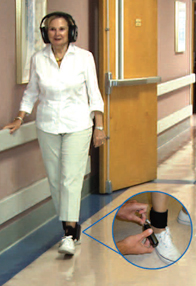 What is Interactive Metronome?

Interactive Metronome is a research supported, brain based rehabilitation and training program that is used by over 2500 Physical, Occupational and Speech Therapists all over the United States and abroad. It is designed to improve the processing abilities that affect attention, motor planning and sequencing. This is accomplished by using innovative neurosensory and neuromotor exercises developed to improve the brain’s ability to repair or remodel itself through a process called neuroplasticity.

Participants are instructed to synchronize various hand and foot exercises to a reference tone heard through headphones. The patient attempts to match the rhythmic beat with repetitive motor action such as hand clapping while wearing an IM glove with palm trigger or tapping his/her toes on a floor sensor mat. A patented audio or audio and visual guidance system provides immediate feedback. The difference between the patient’s performance and the computer generated beat is measured in milliseconds. The score provided indicates timing accuracy.

What is the IM Gait Mate?

IM Gate Mate is an extension of Interactive Metronome that allows the patient to move freely and receive continuous feedback during exercises. A wireless insole detects when the patient perfoms a heel strike. It instructs the client when he/she is walking too slowly or to slow down if he/she is shuffling or dropping his /her foot too quickly. The patient receives no positive feedback if there is no heel strike (i. e., toe walking). Gait Mate works by improving:

Goals of therapy with the Gate Mate:

IM demonstrates that gains in motor planning, rhythmicity, timing and sequencing lead to improvements in the following areas in neurological and motor rehabilitation:

Independence with Prosthetic Limbs Adult and pediatric clients who have benefited from IM include those with:

Contact Us Today For Referrals, Info About Our Services and Career Opportunities